In no particular order, this is what rocked my taste buds in 2017.

Katsu curry at Abiko Curry. I used to get the katsu curry at Go! Go! Curry whenever I went to New York. The rich curry roux was a reliable flavor staple under the benevolent eye of the chain’s gorilla mascot. Abiko’s version takes that gorilla, pummels it and purees it. This is the “medium” spice level, which is hotter than any of the four-pepper numbing dishes at Joe’s Noodle House (see below).

Everything at Back in the Day in Savannah. From the cookies to the Honeycup mustard  (which turns out to be available at your local Giant) to the flaky biscuits to the bacon and pastries, everything here is fresh and flavorful. And there’s a record store next door.

Hiyashi Chuka at Bantam King. In a DCist (RIP) piece on cold noodles, I wrote, “Much as a power-pop band like Big Star reinvents The Beatles’ basic elements by remixing them, this dish seems to turn spaghetti and meat sauce upside-down and backwards. It’s cold leftovers, a breakfast pasta, and spicy ramen all in one. The sesame dressing recalls the popular appetizer chilled sesame noodles, and the ramen bowl’s spice bomb comes in the solid protein form of spicy chorizo.”

Chacha-based cocktails at ARTECHHOUSE. The L’Enfant Plaza gallery opened this year with dazzling interactive digital art, but the real revelation was this Georgian grappa that went down like smooth moonshine. Straight up, it pinches you like an alcoholic needle before filling your body with an immersive, protective cocoon of warm well-being. It’s probably a good thing I have yet to track down a local source.

Spicy Tasty Pork Chop at Joe’s Noodle House.. I’ve been going to this Rockville Szechuan joint for close to 20 years but had gotten out of the habit. On return visits this fall the restaurant was oddly quiet, with plenty of empty tables on what should be busy Friday nights. The reason can’t be the food, which hasn’t lost a step. This dish is the perfect balance of meat flavor and the eatery’s signature numbing spices. It goes great with a beer.

Almost everything at Mission Chinese. You need to go with at least three people to be able to sample as many dishes as possible; keep in mind that the weirder it sounds, the more likely it is to work. Like the Kung Pao pastrami,or the green tea noodles, or (pictured), the shaved ice dessert with cottage cheese, Grape Nuts and pop rocks, which takes familiar flavors and placed them in a completely new context that is a refreshing chaser to the chef’s spicier dishes.

Giant Babka at Paris Baguette. Staying in Manhattan’s Koreatown, my wife and I were in thrall to a seemingly bottomless supply of great restaurants; over three trips this summer we never went to the same Koreatown place twice and have yet to hit a clunker. An exception to the no-repeat rule: bakeries. Along with Tous Les Jours, we discovered the joys of Korean French bakeries. Just look at that thing!

Bagoong Fried Rice at Purple Patch. When my mother would cook with bagoong, a pungent shrimp paste, the whole house would smell like the hot sea, and I refused to eat it when I was a kid. This Mt. Pleasant favorite perhaps dials down that pungency a bit, but the result is perfect, comforting brunch food.

The Bulgogi Sub at Wassub. The best kind of food truck lunch: a freshly grilled cheesesteak, except with kimchi and marinated bulgogi. This may be my favorite sammich in the Washington area–follow them on Twitter to see if they’re in your neighborhood.

The Kodak Beau Brownie was produced from 1930 to 1933, making this one of the older cameras in my collection. It came in a model 2 or 2A: the 2 uses 120 film, which is still produced today; the 2A takes the obsolete 116 format. Before film formats were standardized Kodak was all too keen to produce cameras that required their proprietary rolls. So a lot of old Kodak cameras require obsolete formats like 828, 620, 116, though intrepid camera hounds are known to re-spool available film formats to fit these antiquated cameras. Me, I just buy expired film on eBay – black and white stocks, particularly Verichrome Pan,  hold up fairly well even decades past their expiration date.

The Beau Brownie was offered in a variety of colors,  the most collectible being the rose and green varieties. See the range of colors, and the really keen original boxes – like little monochromatic Mondrians – here.  I have the more sedate burgundy and black model, which is no less stylish and rather more dignified than the rose or green variations that go for exponentially more than I paid for this. 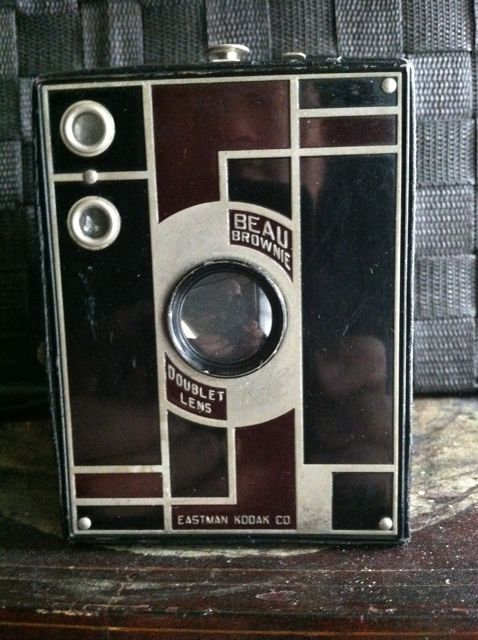 It’s a fixed lens and fixed-focus camera. The viewfinders – one each for portrait or landscape orientation –  are too clouded over to be of much use. You have the choice of two mid-range apertures, which can be selected by a  metal bar at the top of the box that can be pulled out or left in depending on your desired exposure. The shutter mechanism is unusual, though I don’t know if that’s because something’s wrong with my camera. When you release the shutter, a spring loaded rig bounces out of the way to briefly reveal the aperture and through that expose the film. A spring loaded shutter is not in itself unusual but this one is the springiest and bounciest shutter release in my collection.
I loaded it with Fuji Acros and on a sunny day this 100 ASA film was exposed pretty much on the nose. I took the camera to the zoo: 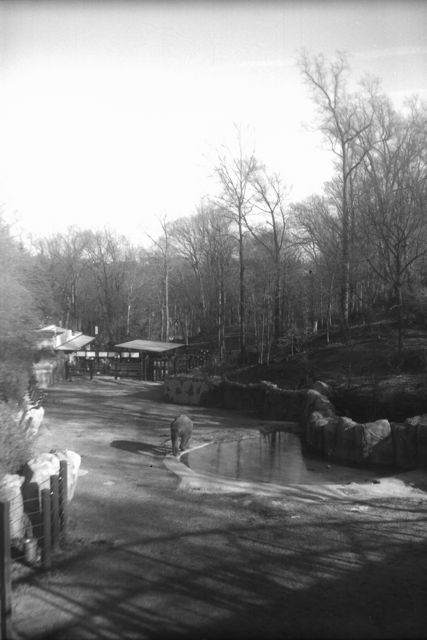 I also brought my D700 with an 80-200 f2.8 lens (no VR) and shot a number of sharp, tightly-composed portraits of this pachyderm. But  this is how people made pictures at the zoo eighty years ago. A roll of 120 produces 8 6×9 exposures. If you look closely, you can see a red panda in this one. 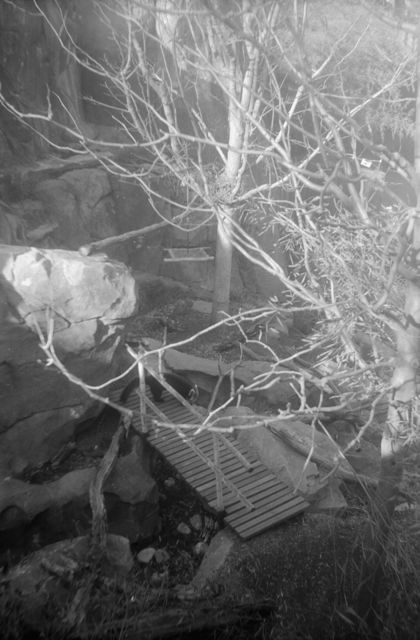 A pair of ducks at the frog pond were eager and closer subjects, but the lens doesn’t focus enough for an intimate portrait. 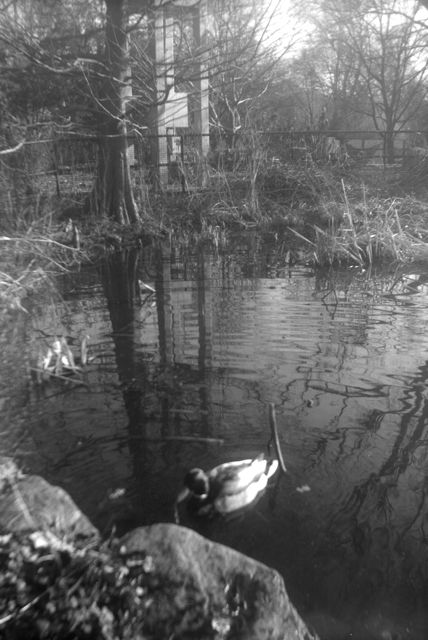 Welcome Prince of Petworth readers. Apart from occasional blogcritics reviews, I’ve been neglecting this blog in favor of my tumblr, but it behooves me to produce content of a more personal nature here, being that my work blog has lately been more fun than my so-called personal blog. But before I tell you about how I was born, and what makes me cry, and how my experiments with butterscotch pie turned out, I’d like to wish everyone in the Greater Washington Area and all across this great solar system of ours … a Happy International Waffle Day! The picture at left is from the web presentation Washington As It Was: Photographs by Theodor Horydczak, 1923-1959, where you can also find a series of views of the old Waffle House on 10th Street, across from Ford’s Theatre. You missed a spot!

the circle theatre, originally uploaded by a nameless yeast.

A program ca. 1984 from the late, lamented Circle Theatre, now the site of an office building, not a parking garage as the link says. In the ’80’s, the stretch of Pennsylvania Avenue that housed The Circle also had a bar (the 21st Amendment, being near 21st Street NW), a science-fiction bookstore and a liquor store. That entire block is gone. View large.

rory ride me raw
Originally uploaded by a nameless yeast.

la corbiere (detail)
Originally uploaded by a nameless yeast.
la corbiere, as performed at the georgetown swimming pool for the capitol fringe festival.

Ruscha drolly commented on slides of his own work and work that’s inspired him.

some names are approx.

A slide of what looked like a chrome sphere on a stick was projected on the screen while we waited. Ruscha began his talk from that slide, which after the lights dimmed he id’d as the gearshift of a 1950 Ford. Contrast that with the next slide, the gearshift of a 1950 chevy – a knobbier shape painted off-white, that doesn’t strike him the way the ford does. Either pic could be considered boring (Rushca’s one of the inspirations for my foray into boring photography) but at the macro level they’re practically abstracts.

A bottle of higgins india ink. He admired it as much for the bottle design as for the versatile substance inside it: good for fine lines, dripped into blotches, poured on so thick it cracks, etc.

Spike Jones. Ruscha was a gofer for Jones and his City Slickers when they’d come through Oklahoma. They might send him to buy a dozen eggs, which he’d bring back for Spike and Co. to hurl at each other.

A dada ink drawring by Johnannes Barguild. Ruscha admired the mystery of it – that there was no answer to the questions posed: is it a musical score? bugs at the gate? this drawring inspired his own bugs at the gate, in the form of automobile parking lot lines (a theme he’d pick up again in his photographic studies of parking lot oil stains and sundry).

Jasper Johns flag 1958 (Ruscha is a distinctly American artist, and many of his signposts, from auto design to the 20th Century Fox logo to word drawings like BABYCAKES, are very American).

Walker Evans, cars parked on a residential street. (When I saw the Ruscha and photography show at the Whitney last year, it occured to me that Ruscha was the source of banal, deadpan photography, but the lines seem to come from Walker Evans, and maybe Atget before him). For Ruscha, Evans’s pictures are completed by the viewer’s sensual experience, adding sound and smell (which distinguishes him from some of his odorless successors).

Edgerton’s picture of a bullet going thru an apple. Made for scientific purposes but also = art.

Imperial war museum object: a bedpost? Bertelli’s “Endless Mussolini.” It “broke the sound barrier for me.”

ANVIL! “It’s American,” a theme he brings up again. “It’s what people ask you to carry upstairs. Endless Dumbo.”

Lichetenstein sneakers. Showed a “total disrespect for aesthetics.” “it was repulsive, then appealing, then profound – it made a convert out of me.”

“Course of Empire” Thos. Cole, a series of paintings that charted the rise and fall of a civilization, marked by the same mountain peak in the distance; reminds me of a sequence of drawings in CRUMB where the artist traced the devolution of a country lane into succesive layers of “progress” that ended in a horribly homogenous (yet darkly beautiful) array of chain stores and telephone wire.

1850 Millet’s Ophelia–> LA museum on fire: tragedy in serene setting. as opposed to Guernica, all tragedy (he didn’t denigrate Picasso but that hit on why I find that the more Picasso I see the more he annoys me)

SHE DIDN’T HAVE TO DO THAT (blood on satin)

’39 ford=elephant climbing up hill fuzziness, out of focus

AN EXHIBITION OF GASOLINE POWERED ENGINES: the light comes through a window at such a hard angle it “slams like a pound of bacon.”

paintings of ideas of things rather than things themselves.

redesigned US currency. Andrew Jackson’s face was one of historical dignity; now he looks like he could be somebody “babbling on his cellphone in starbucks”